Ossuary and other stories 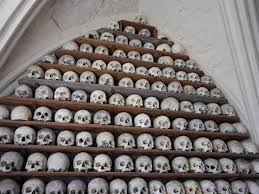 Our week has once again been a bit of a mix, but began with Ben, our operations Manager installing some new radio microphones at St Leonards Church, Hythe in Kent. After he had finished the work he visited the crypt where there are a huge number of skulls and other body parts which have been in the church since the middle ages. It is rare to have a chance to visit such an amazing place. The rest of the week has included assisting Brighton University to ensure that the British Science Festival went well, and beginning to install the items for two of the Schools within Sussex University. When we consider what was the outstanding element of the week, the Hythe Ossuary is hard to beat.